Terry: So what happens? He gets the title shot outdoors on the ballpark and what do I get? A one-way ticket to Palooka-ville! You was my brother, Charley, you shoulda looked out for me a little bit. You shoulda taken care of me just a little bit so I wouldn’t have to take them dives for the short-end money.

Charlie: Oh I had some bets down for you. You saw some money.

Terry: You don’t understand. I coulda had class. I coulda been a contender. I coulda been somebody, instead of a bum, which is what I am, let’s face it. It was you, Charley.

When Marlon Brando delivered these celebrated lines, he famously did so while reading off of a cue card placed in front of him. Brando didn’t memorize his lines, and his improvisation was entirely intentional. As an early method actor, Brando believed that excessive memorization detracted from the natural immediacy of his characters. If an actor is to really get into a character, the last thing they should do is behave as a deliberately non-real, memorized persona. Brando brought to the screen a rough, unhewn naturalism that has rarely been equaled.

I am myself somewhat surprised to be writing this piece, as my literary tastes have long been more in the direction of the romantic and stylized and less in the direction of the naturalistic. I love the strum und drang of the German romantics, the intensely crafted psychological landscapes of Dostoyevsky, and the Aeneid of Vergil, which ranks among the most artfully constructed works in the history of literature.

Yet the great romantic works of literature and the view of life they presented have largely failed to endure in our digital, audio-visual age. Wider movements in culture and society notwithstanding. I think that there is a basic aesthetic reason underlying this gulf between great literature and modern drama. Literature, being essentially verbal and conceptual, creates only by stylizing. When Dostoyevsky begins Notes From Underground with the memorable introduction “I am a sick man… I am a spiteful man. I am an unpleasant man” he is at once defining, creating, and stylizing the unique world of this first-person narrative.

But film simply begins with a camera. The world is a given, no matter how much we may alter its parameters through lighting, makeup, and CGI. Unless the director is to resort to a crude narrative voice-over, they have to somehow attempt to convey the same narrative sentiment through objects, gestures, and actions. The words and ideas mean nothing if the world feels off. The good screenwriter realizes that they need to deliberately struggle against the idea that the “world is too much with us”, to use the famous line of the romantic William Wordsworth. To the contrary, the willful absence of a coherent world has been the death of many films originally based on compelling stories.

The great romantic writer blocks out everything incidental until we are left with something approaching pure awareness; the artist in an audio-visual age starts with the world, which must look, feel, and act like the world if it is to be at all plausible.

To give another Marlon Brando example — the cat that Don Corleone grabs during the opening scene of the Godfather was completely unscripted. Brando was just doing what Brando did, and Brando being Brando became a completely natural part of one of his most memorable roles. Imagine if a clumsy writer had tried to get the Don’s relationship with his cat to be a part of his written character. All of a sudden, art collapses into gimmick and kitsch. 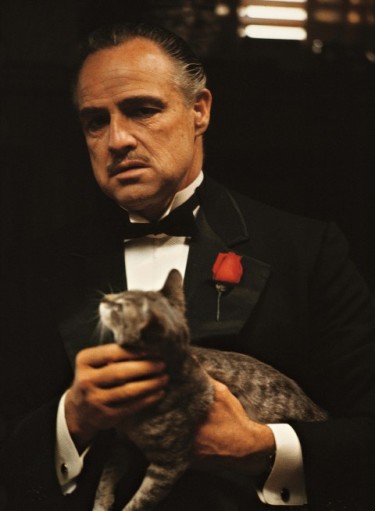 and it will all fall into place.

While such aesthetic analysis is certainly worthwhile in its own right, the increasing aestheticization of personal and professional life make this a topic of vital importance. Watching cable news is simply a nightmare of over-stylization exaggerated to an almost inhuman extent.  But this style of presentation is not simply an idiosyncratic choice on the part of cable executives. Every facet of modern American society is geared toward a similar artificiality of over-production. Media coaches and PR consultants have created an entire industry based around how to teach people how to represent themselves, something completely inconceivable before the world of the mass media image. It is likewise in the high-stakes work of professional self-marketing.

There seems to be a backlash against this artificiality in what the French philosopher Baudrillard described as the growing culture desire for the illusion of reality. In the democratization of media, we are presented with something unpolished and are told that this finally the way it really is, against the rows of nearly coiffed experts we have been suffering for so many years. The reality television president is just one example of how this push-back for reality has in turn influenced the culture.

Unfortunately, all this backlash has accomplished is elevating the pettily theatrical to a higher stage and enabling the pre-packaged stylization of every minute facet of our lives. Rather than bring back some sense of naturalism into culture, the ‘reality’ movement has only democratized the role of celebrity, so that our careers, dating lives, and political engagement all now depend on tightly controlled digital personae.

People of my generation have largely been raised in the aftermath of the era of mega-celebrities in the 1980s, so there are few examples of naturalism in media figures to really appreciate. In the age of Reagan, we began to switch from making the successful famous to making the famous successful. The 1970s seem to have been the last gasp of a really natural public presence. A heartfelt “Well, I’m not a crook” from a Nixonian politician would be a very refreshing change from the elaborate evasions and dodges we’ve erected since then. The cult of fabrication we’ve erected since then has made such straightforwardness very rare indeed. We only get “straight talk” in the form of equally implausible bombast.

It seems to me like our obsession with style is a kind of new romanticism without the romance. We hand out jobs like we are casting for film roles according to the Celebrity Apprentice model of management. CEOs are portrayed like superheroes in the business world even as we’ve lost confidence in the modern economy to produce the outcomes it promises. And while the center-left wing of this stylized modern culture claims to concern itself for the representation of minorities in the media, these too are just highly controlled images. Neither left-wing activism nor right-wing populism have satisfied our desire for reality in media. We all want to see the average person on TV, but the average person has disappeared, as we are all too busy pretending to be them!

In truth, this romanticism without the romance flourishes because we can’t accept many of the hard truths of naturalism. The natural style teaches us that the world is rough, complicated, and unable to be fit in pre-packaged stereotypes. It’s a place where most people aren’t rabid partisans, but simply alienated observers of a heavily produced cultural play happening in front of them on television. It’s our gut reaction when we hear about a school shooting and we don’t think about anything political, but just want to say “What the hell is wrong with people?”

There is also an economic realism to naturalism that is sorely needed in our time, just as the great naturalist Steinbeck explored the real lives of workers during the Great Depression. Naturalism can be meaningful when it takes up the difficult task of vividly contradicting whatever fantasies the powers that be are pushing at any given time. Could you imagine what Friends and the Big Bang theory would look like if they were actually about real people?

The ancient literary critic Longinus divided all art into two styles, the rough and the smooth. According to him, the smooth was always the more popular because it required less effort on the part of the viewer or listener. The rough style was proudly difficult, harsh sounding. It taxes our ear and demands our active interpretation. It relishes complexity and demands that we prove ourselves worth of understanding. It throws us in the world and demands that we figure it out.